Jessie Brown is a native Bostonian who has been writing “since I can remember.” She has written “in every place I’ve lived,” including Oberlin, Ohio, where she received her Bachelor’s degree, and the University of Córdoba, Spain.  She took her Master’s degree in English and Creative Writing from Stanford University, where she studied with Denise Levertov and
W. S. DiPiero, and earned an Academy of American Poets prize.   Over the years she has also studied with a number of well-known poets including Maxine Kumin, Alicia Ostriker, and Marie Howe. ​ 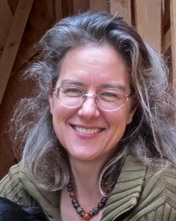 She trained through the California Poets in the Schools program, but has worked as a poet-in-residence in Massachusetts since 1993, leading teacher seminars as well as classroom writing workshops in public and private schools.  She also holds poetry workshops for adults, both independently and through community centers.  In addition to her teaching work, she has a background in journalism as a writer and editor.  Other interests include music, visual arts, education, sustainable living, and spiritual community.

Currently she works with an ongoing group of women writers called the Alewife Poets who meet regularly in Cambridge and Arlington.  She gives frequent readings through the Friends Meeting at Cambridge and the Arlington Center for the Arts.  She lives in an intentional community in Arlington, Massachusetts.